The boys from Clapham 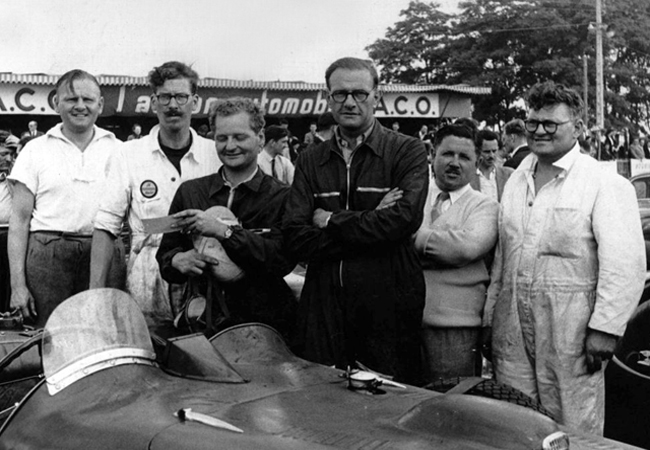 The boys from Clapham

The success of the relatively small Allard Motor Company, can be attributed to a team of passionate and talented individuals inspired by Sydney Allard’s endless appetite for ingenuity and performance – There was a rumour that the big company clock in the factory ran backwards, but such was the dedication of the people that surrounded Sydney Allard, few seemed to worry about long nights or early starts. This section features short biographies of just some of the boys from Clapham, and others, who did the best to ensure that the name of a small British car manufacturer was known throughout the world. 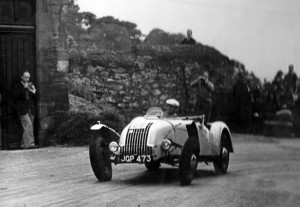 Mr Leslie Allard
Leslie was Sydney Allard’s younger brother. He often campaigned JGP 473 (the forerunner of the J2) in hill climbs and sprints throughout the UK in the formative Allard years. As well as general Company promotion, Leslie was a non-driving member of the 1950 Le Mans team. In 1955, along with Tom Lush and Sydney, Leslie drove the works Ford Zephyr in the Monte Carlo and RAC rally of Great Britain, and then partnered his brother again in a P1 for the 1956 Monte. (Leslie Allard is shown far left in the title photograph on this page). 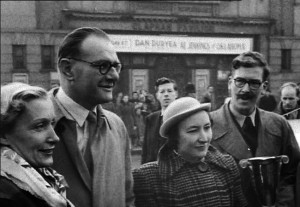 Mr Tom Lush
Tom Lush worked at Adlards Motors in 1945, moving into the Allard Motor Company when it was formed in 1946 to became the personal assistant to Sydney. He acted as a liaison between the Company’s car development and production activities, but also helped to organise entries for many competition events, bravely acting as Sydney’s navigator on many occasions. As one who was at the heart of Allard operations, in 1977 he wrote and published ‘The inside story’ – a book that has now become the definitive history of Allard. (Tom Lush is shown second from the left in the title photograph and holding the Monte Carlo Rally trophy in the photograph here). To view a rare interview with Tom, reflecting on his Allard days, please click here. 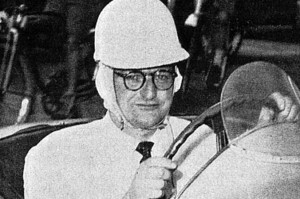 Mr Tom Cole
Although born in America, Tom Cole spent a good part of his short life in or around Allard’s. Having successfully campaigned an Allard K2 in the US, Cole co-drove with Sydney to 3rd place at Le Mans 1950 in a Cadillac engined J2, even with the car jammed in 3rd gear for 6 hours. Unfortunately, in 1953 Tom Cole was killed at Le Mans whilst driving a Ferrari 340 MM. (Tom Cole is shown at the centre of the title photograph on this page holding crash helmet). 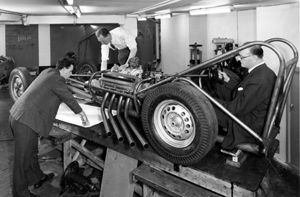 Mr David Hooper
David Hooper was Chief Draughtsman & Chief Engineer at the Allard Motor Company from 1948-1965. In David’s words, many of the projects he was responsible for “started with Sydney’s ball point sketches, which included a certain amount of detail which I then had to get made”. Aswell as his day -to-day involvement in production model Allards, David designed Europe’s first dragster (shown left), drove the Steyr Allard in various sprints and hill climbs and in more recent times has helped ex AOC club captain Jim Tiller to develop the world’s fastest J2 Allard. David is still highly involved in Allard matters, sharing his unique ‘insider knowledge’ with many Allard owners. He also regularly supplies indispensible articles to this web site through his ‘From the drawing board’ page. Please click here to acces the page directly. (David is shown on the left of photograph, with Sydney at the wheel of the Allard dragster and John Hume in the white shirt). 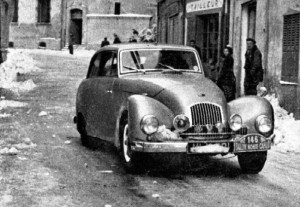 Mr Guy Warburton
Guy Warburton drove some of the very first Allard Specials in the pre-war years, including one of the three ‘Tailwagger’ team cars, the other two being driven by Sydney and Ken Hutchinson. His prowess in early trials led him to co-drive with Sydney in the P1 on Allard’s famous Monte Carlo Rally win of 1952. (Guy Warburton is shown on the far right of the title photograph on this page). 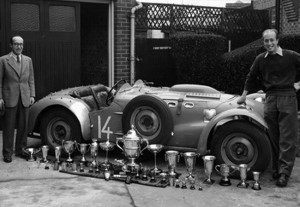 Messrs Maurice & Cyril Wick
The Wick brothers were longtime friends of Sydney Allard and became long-time advocates for the marque, enjoying much success in Allard cars. Over the years, Maurice and Cyril (shown left and right respectively in the accompanying photograph) owned several Allards including a pre-war special, a J1, two M’s, and the J2 pictured above. Sadly, Maurice passed away in 1981, but Cyril still leads a very active life and is a current member of the Allard Owners Club.