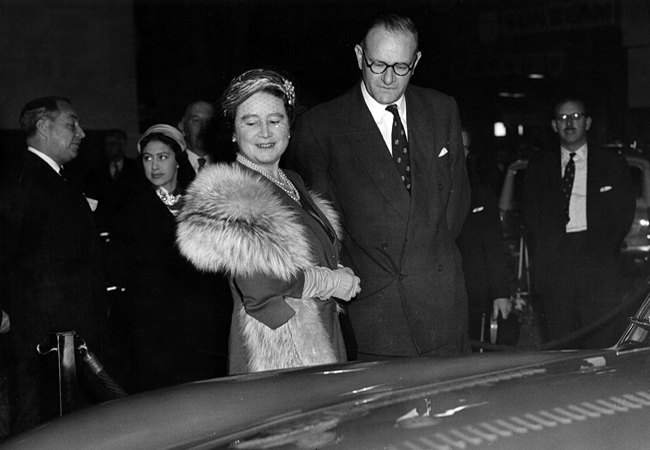 It is a unique achievement in automotive history that one man can claim to have won both the Monte Carlo rally and achieve a podium finish at the Le Mans 24 hours race on his first attempt, in cars bearing his own name. Sydney Herbert Allard, was that man. ‘The Guv’nor’ was above all, a keen and competitive enthusiast of motor cars. It is perhaps this, that explains his passion for performance and success, and why today, his name, together with the incredible cars that his small company from Clapham built are now recognised and revered throughout the world.

Born in London, Sydney Herbert Allard was educated at Ardingly College in Sussex. Allard commenced racing in 1929 with a Morgan three-wheeler, later converted to four wheels, which he ran at Brooklands and in early trial events. In 1935 he won his class for unlimited unsupercharged sports cars, at the Brighton Speed Trials in the first of his Ford V-8 engined speciaIs. Further competition success ensured that the Allard Special was put into limited production with Ford V8 and Lincoln V12 motors. In 1937 Allard attempted to climb Ben Nevis in Scotland, in his Allard Special. The car overturned and rolled, but Allard emerged with only bruising. That year, Allard, with Ken Hutchison and Guy Warburton in the ‘Tailwaggers’ Allard-Specials team, competed successfully in trials, sprints, rallies and races.On July 15, 1939, Allard took a class win at the Lewes Speed Trials in a time of 22.12 secs. Allard won the last speed event to be held in England prior to World War Two. Having set the fastest time at the Horndean Speed Trials, his car overturned past the finish line. Both he and his passenger, Bill Boddy, were thrown clear and uninjured.

During World War Two Sydney Allard operated a large repair shop fixing army vehicles, including Ford trucks and Jeeps. In 1943 he had 225 employees and was renovating more than 30 vehicles a week. At the end of the war Sydney soon returned to competition, taking part in the Filton Speed Trials on October 28, 1945. He restarted his car company, coping with petrol rationing, material shortages and export quotas.

In 1949, Allard cars won the team prize in the Monte Carlo Rally (L. Potter 4th overall, A.A.C. Godsall 8th, A.G. Imhof 11th) with Sydney Allard finishing in 24th place. In 1950, Allard finished eighth in the Monte Carlo Rally, then raced in the Targa Florio in Sicily where his J2 Allard caught fire after losing control over a railway crossing. He bounced back with a third place at the 24 Hours of Le Mans that year, again in the J2 Allard, partnered with Tom Cole. A gearbox failure left Allard and Cole driving for hours with top gear only. Allard’s determination and fearless driving captured the imagination of the huge crowd. Sydney then achieved international recognition by winning the 1952 Monte Carlo Rally in an Allard P1, with co-driver Guy Warburton and navigator Tom Lush. Starting from Glasgow he narrowly defeated Stirling Moss, in a Sunbeam-Talbot 90, who finished second overall while competing in his first rally. The P1 was powered by a 4,375 c.c. Ford V8 side-valve motor. Mrs. Eleanor Allard, Sydney’s wife, also competed in this event, accompanied by her sisters Edna and Hilda, but retired.

Allard competed again in the 24 Hours of Le Mans in 1951, 1952 and 1953 but did not finish. In 1952 he and Jack Fairman drove the works J2X, chassis number 3055, fitted with a Chrysler hemi engine, where the car retired at 6.30 a.m. In 1953 he shared a Cadillac-engined Allard JR with Philip Fotheringham-Parker, leading the race at the end of the first lap, but on lap four he was the first to retire when the quick-change differential chassis mounting fractured, causing damage to a rear brake pipe. In 1952 and 1953, a sister car was driven at Le Mans by Zora Arkus-Duntov, a one-time Allard employee. Carroll Shelby also raced an Allard-Cadillac J2 in the United States early in his driving career. Thus the successful Allard formula of an American V8 engine in a light chassis inspired the development of the Chevrolet Corvette and the A.C. Shelby Cobra.

In the 1960’s, Sydney Allard continued to compete in rallies mostly accompanied by Australian navigator Tom Fisk. They won their class in the 1963 Monte Carlo Rally in a Ford Allardette. Starting from Glasgow they reached Monte Carlo unpenalised. In the 1964 Monte Allard hit a level-crossing in Czechoslovakia in his Ford Cortina and retired. Sydney’s final outing in the Monte Carlo Rally came in 1965. In 1961 Sydney Allard, (considered by many to be the father of British drag racing), built the Allard dragster. Constructed in 23 weeks between January and June 1961, in a small workshop directly beneath Sydney’s office at the Allard main works on Clapham High Street, the car featured a 354-cubic inch Chrysler motor with front-mounted 6-71 GMC supercharger.

The car was then invited to appear over the standing start quarter mile at an N.S.A. record meeting at Wellesbourne Aerodrome, near Stratford-Upon-Avon, on October 14, 1961. Denis Jenkinson writing in Motor Sport said: “Sydney Allard pointed the sleek blue dragster down the quarter-mile, let in the clutch, opened up and with a sound like a large bomber going down the runway disappeared through the timing traps in 10.841 sec”. Sadly few spectators witnessed this achievement. According to Jenkinson: “Allard’s temperamental machine eventually did 10.48 sec on its best run,” for the standing-start quarter mile, which took place at Debden, Essex on April 14, 1962. At the time, this was the fastest quarter-mile time ever recorded in the U.K.

Sydney Allard passed away at his home, Black Hills, Esher, Surrey on April 12, 1966,  the day after the opening of Santa Pod, the first purpose-built dragstrip in England. Fittingly, it was one of the biggest events to date for drag racing in England and several Allard Dragons were in competition that day. 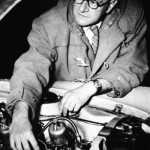 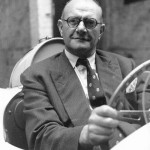