A brief history of The Allard Motor Company.

Sydney Allard was a successful trials and hill climb driver before the war, to such an extent that people ordered cars based on his winning car. He made 12 cars before the war.

Sydney Allard’s first Allard, the famous CLK5, was built in 1936. It was evolved from a crashed Ford V8 saloon. The chassis was cut down, normal Ford suspension, rod-operated brakes and welded Ford wheels retained, while the body had a GP Bugatti tail, and the steering box was also Bugatti. The engine was a standard 30-hp V8. Incidentally, Warburton later acquired it and today it still exists.

CLK5 was so successful that two more similar Allards were built, using Ringer, “imitation-Bugatti,” tails and sloping vee radiator grilles coming to a point at the base. These cars incorporated new side and cross-members purchased from the Ford Co, Ford steel disc wheels, and divided axle ifs. FGP 750 had a drilled chassis, was very light, and Allard used it to collect many awards. The sister car was bought by K Hutchison and driven by him in a pre-war Experts’ Trial, amongst many other events.

The next three Allards had 2/4-seater bodies and flat instead of vee radiator grilles, with inbuilt stoneguards. The first, AUX 59, was supplied to Sydney’s father and often chauffeur driven ; it is now in Scotland. The next, EXX 455, was owned by Mr Gilson, went to Ireland, but is now back in this country and has been converted by its present owner to coil-spring ifs. These cars had Ford wheels but the third, EXP 469, had wire wheels and Rudge hubs. It was sold to someone in Berkhamsted and last year was driven in trials by Hancock.

A more exciting car came next, for whereas those mentioned so far used V8 30 engines with iron heads, FXP 470, built for Ken Hutchison, had a Lincoln-Zephyr V12 engine. A Ford gearbox was retained and the engine accomodated by shortening the torque-tube. A 30-gallon slab-tank was fitted, and the flat radiator grille retained. Hutchison drove this car in the 6-Hour Sports Car Race at Brooklands but the fan belt fell off. Pulling a 4.11 to 1 axle ratio it would do 60 in second, 90 mph in top and the 1-mile in 17.8 sec. Later Len Parker made this Allard the basis of his fearsome rear-engined Parker Special trials car.

We come now to three more-civilised Allards built just prior to the war. They had full four-seater bodies, streamlined wings, -spatted at the back, and the sloping vee radiator grille coming to a point at the base. EXP 470 was a Zephyr V12-engined car built for Silcock and driven in the Alpine Rally after the war by Len Potter. ELL 300 was a similar Allard, but with V8 engine, delivered to VSA Biggs. One of these cars was later driven in trials by K McAlpine, who increased its ground clearance and fitted strip wings, etc.

The last of this series IMO 192, was another V12 intended for the 1939 show but unfinished when war intervened. It was later completed and driven by Allard in the first Speed tidal after the war at Bristol, and also in trials, including an “Experts.” Experimental work leading up to the production cars was performed on it, then Wick acquired it and now it resides at Banstead.

During the war Sydney received a government contract maintaining jeeps and other Ford V8 based vehicles. After the war he set up the Allard Motor Company Ltd and commenced motor manufacturing. In all he made about 1,910 cars, but candidly admitted that he became a manufacturer to subsidise his competition activities.

The J1, was the first production Allard. Some 12 J1’s were produced, being followed by 16 different models, until the last car a Mk2 Palm Beach left the Southside Workshop in 1959. Of the K type, there were three different models, followed by the L type tourer, 500 M types plus a small number of M2X’s. Some 559 P type saloons were made being followed by the P2 type Monte Carlo saloon and Safari Station Wagon. The J1 was followed by J2 , J2X, and lastly by the JR. The Mk 1 Palm Beach models were supplied with either Ford Consul or Zephyr engines, and lastly the MK2 Palm Beach and Gran Turismo (GT) models which were produced with various  engines but mainly the Jaguar 3.4 XK 6 Cyl.

Perhaps the most remembered Allard models were the J2 and J2X which were developed from Sydney’s 1949 RAC Hillclimb Championship winning air-cooled Steyr V-8 single seater. Both these models had many competition successes in the world including the USA and Europe. A “Motor” magazine road test in 1951 of a Cadillac powered J2 described it as “the finest sports motor bike on four wheels ever conceived” and quoted it’s splendid handling qualities and performance as “outstanding”.

When Allard production ceased, the Company became main agents for the Shorrock supercharger and developed a modified version of the Ford 105 &109E Anglia, called the Allardette, which was produced in sufficient numbers to be homologated to compete in the the modified saloon class in International rallies. Both Sydney and his son Alan competed in Allardettes in European Internation rallies.

Allard Sports Cars.In 2020 Allard Sports Cars, a company owned and run by Alan (Sydney’s son)and lloyd Allard (Sydney’s grandson) have manufactured an authentic Allard JR. No 8 to the specification of the 1953 Le Mans JR Chassis No 4. Marking a return to production after a gap of over 60 years it is hoped that this will be the first of many Allard cars produced by the company.

Best known for his ‘J’ Series sports racing cars Sydney achieved iconic status with the 1950 J2 followed by the J2X and the J2X Le Mans utilising V8 engines from Cadillac and Chrysler.

In American sports-car racing in the early 50’s The J2 led the field forcing major manufacturers such as Ferrari and Jaguar to take stock in part after an infamous Allard J2 on the East Coast won 8 major races in a row.

Carroll Shelby drove a J2 with great success, this fundamental idea of mating a British chassis with an American V8 led Shelby to take the idea with the later development of the Cobra, a fact he readily acknowledged. 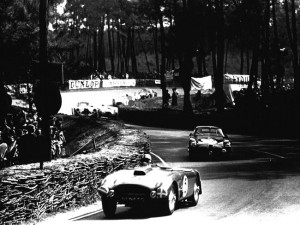 The J2 was followed by the J2R.  At Le Mans in 1953 Sydney Allard in a JR led the field for the first lap but had to retire with a fractured  brake pipe.

A great triumph for The Allard Motor Company, was when Sydney won the 1952 Monte Carlo Rally, with Tom Lush and Guy Warburton in an Allard P1 Sallon. This is the first (and only) time the rally has been won by a manufacturer driving his own car.

Production by model by month /year.